Fatal Crash closes Route 523
On January 29, 2020 at approximately 5:18 PM, emergency units were dispatched to County Route 523 in the area of Schaefer Farms for a motor vehicle crash. Off duty first responders were first on scene and determined that the driver of one of the vehicles, Robert T. Hewitt, 72, of Readington Township, was not breathing. First responders removed Mr. Hewitt from the vehicle and CPR was initiated. Units from the Whitehouse Rescue Squad and Hunterdon Medical Center Paramedics arrived and took over care. Mr. Hewitt was subsequently pronounced dead at the scene.

An investigation was initiated by Readington Township Police with the assistance of the Hunterdon County Prosecutors Office. The preliminary investigation shows the Mr. Hewitt's vehicle was traveling south when it crossed the double-yellow center line and struck a northbound vehicle being driven by Raymond Krov, 64, of Holland Township, NJ. Mr. Krov was evaluated by EMS at the scene but was not taken to the hospital. Traffic control assistance was provided by Raritan Township Police Department as well as the Three Bridges Fire Department.

The investigation is still active, and the cause of death has not been determined yet. Witnesses to the crash are encouraged to contact the Readington Township Police Department. 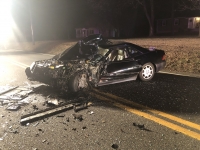